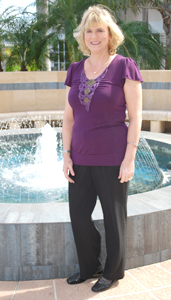 “I originally thought it was a spine issue,” she recalled. “Finally, I had two different doctors confirm that it was my hip. They said the joint looked like that of a 90-year-old.”

Dr. Grandic told Caldwell about a new micro-invasive hybrid procedure called the Superior Approach. Heavily involved in the development of the Superior Approach during his Fellowship-training, he is one of only five surgeons in the world, and the only one in Florida, to routinely perform this tissue-preserving procedure.

“The biggest advantage is there is no cutting of muscle or tendon, and no dislocation of the hip joint during the procedure,” explains Dr. Grandic. “The prosthesis is assembled inside the body, like a ship in a bottle.”

Unique benefits of the Superior Approach include the ability of the surgeon to customize the procedure to each patient’s anatomy, select the most appropriate implant and preserve individual muscles. It requires a small incision above the hip, and eliminates the need to twist the hip into unnatural positions - a common element in all other hip techniques. This maximizes stability and promotes a rapid recovery.

“The moment I met him something clicked,” said Caldwell. “It was obvious he cares about his patients and really loves what he does.”

After her surgery at the Bethesda Orthopaedic Institute, Angela Caldwell immediately felt better. “The hip and incision area were tender, but I had immediate relief from the shooting pain I experienced from the bone-on-bone friction before surgery.”

The day after the procedure, she was walking and practicing on the steps in the Orthopaedic Institute’s rehabilitation gym. One the second day, she was able to go home.

“The hospital staff were awesome,” said Caldwell. “You can really tell everyone takes pride in what they do. I would definitely recommend Bethesda.”

Dr. Grandic prescribed outpatient rehabilitation for Angela Caldwell to help her regain strength and learn how to walk again without hip pain. Just four weeks later, she was back at work, continuing down the road to recovery.